A portrait of hatred

April 01, 2014
There is a silent surrender going on. The demise of humanity, the death of the very soul. Who did it and how it happened is irrelevant now, it has become a matter of survival. 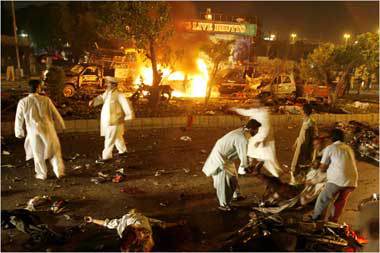 The thinking man has bought his life in exchange for silence. Those who teach, teach hatred, those who preach, preach death. No boundaries, no limits, murder of innocence, a mother of 60, a beloved son, a passionate teacher, just statistics.

Destroyed lives, broken families, the innocence robbed from a child's eyes replaced with fear. Greed rules empty lifeless hearts which cannot feel, all consumed with wants and desires, the lust for power, the destruction of faith. Words like love, loyalty & sacrifice long forgotten.

Such barbarity, such cruelty, sermons of hatred, and those making them on pedestals of highest order. They ride on the shoulders of mindless drones conditioned to never question, to look the other way when they hear screams.

For there is safety in burying your head in the sand, but the sword wielded by those who are consumed by hatred always finds another target, there is always someone next, someone else to hate, and there's always the possibility of hatred in response.

Consumed self obsessed beings, governed by petty desires, kept amused by the frivolous, the profane. The decay all encompassing the commoner and the elite.

A society built on hatred cannot be sustained and it collapses under its own weight. What is to come is such collapse into chaos, perhaps fitting, for a society which allows hatred to breed discrimination & persecution deserves punishment.