Showing posts from April, 2010
Show all

A tough road to travel on

April 27, 2010
I did it all. I've seen it all unfold. I know the questions and even know the answers.I grasp the reality of it. I try to hold  on to it. I try to fail. I know the limits. I close my eyes. I try to dream but the nightmare wont let me sleep. what kind of dream is this. Somebody wake me up…Save me! I know what I've lost and I know what I've gained. I keep hoping that it would end this time. How did I end up here looking at the abyss of sorrows. All I want right now is to slowly drift into non existence.  I've had enough. This has to stop.
Post a Comment
Read more

The Story of the One and the Other… 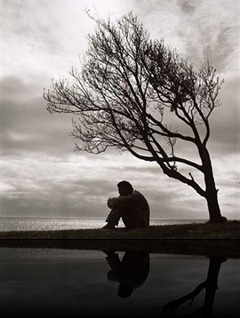 In between one and the other there resided an "us" once. It was beautiful as day light and bright as sunshine. It was bliss on earth . The "us" took for granted that word "LOVE" and fell into the trap that love really is… Love what a futile exercise if there ever was one. It consumed them and then the one realized that there was no "us" anymore ... just One and the other. Its like One never knew the other, two strangers confined to a perpetual darkness. Who knows who forgot first the one or the other. The sunshine turned to darkness and the suffering began. The one suffered in silence. Betrayed ,abused and rejected by the other…  Still the one couldn't hate the other… How could one forget. Why do we forget and get tangled in an unending cycle of agony. How can it be. How can the other be so cruel. How can the other destroy the very thing he wanted to build. One blames the other ... the other blames the one... keeps going on and
Post a Comment
Read more

These days working on a new project. Its a new version of the Yasurnal Quran for MTA. Here is a screen shot of the project in Adobe Premiere CS3. It takes about 3 days to finish one lesson. What makes the Yasurnal Quran unique from others is the font that was developed by Peer Manzoor Mohammad Sahib in 1904. It was converted to digital font by some guyz at the Jamia Ahmadiyya making this video version possible. The whole Project is done using the multi-cam technology in Adobe Premier which means that during recording no switcher is used and all cameras have tapes in them giving more flexibility during editing. There are a lot of separate parts which combine to make the complete picture for instance the 3D portion which is done in a program called Pro Animator. Take a look at the project pic (above)to see how much work is involved. Every letter or words has its own 3D element which has to be made separately. Then there is the background & other element layers. As far a
1 comment
Read more