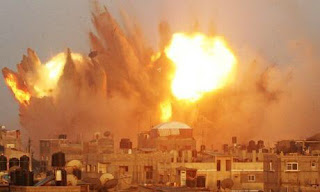 Image after image trickles down my Facebook and twitter. Images of children in pain, parents mourning, unmeasurable suffering. Images intermingled with the routine triviality. Some lament the atrocities and on the same page post the mundane. The outrage, just like anything else, worthless. The hypocrisy rampant and selective. Some atrocity becomes deserved while an other, genocide.

I lay awake at night sleepless, that image of a child with severed limbs stuck in my mind. I see the news, wishing someone of power in the world would stand up for the oppressed, wishing someone with authority would put a stop to genocide, wishing humans would not just ignore the tears of a child who lost both parents and wept himself to sleep, Alas! nothing.

Some days pass, outrage fades away, till the next outrage, the next killing, the next child burned to death. No remorse, as if humanity never existed, those who suffered become the executioners. The cycle continues.

All of this because a piece of land? Isn't there enough land on this earth for everyone? Endless cruelty. Endless blood spilled in the name of religion, in the name of God?

Everyone finds someone to blame, what of the children? Did they steal your land from the womb? I look on the news to see perhaps someone dares speaking the truth, sorrow runs down my spine. How mad a world we live in, where no one dares speak for the oppressed. The world leaders, mute and pledging support for the oppressors.

I realise that I can do nothing to ease the suffering of my brothers in pain but wet my prayer mat with tears. For there is One who listens to the cries and laments. He gives the wrong doers maximum leeway cause He wants their punishment to be the maximum as well.

As So called Muslims kill other Muslims, all of the Muslim nations that could do anything about the outside threats are busy in internal conflicts, this is by design. The rest are quiet for vested interests. How can one blame the outsiders when those on the inside turn a blind eye to oppression and persecution within their boundaries.

All of the problems the Muslim world faces can be traced down to their own mistakes which presented their enemies opportunities to exploit their weaknesses. So if there is a solution, it starts by us realising the mistakes.

They all know the solution, unity. They hear the message but ignore it, the simple truth that the Messiah promised by Muhammad (sa) has arrived and you will find unity under his banner with his successor the Khalifatul Masih representing the true values of Islam and a message of global unity and love for all hatred for none.

No amount of bloodshed can ever achieve peace. Today's battles can only be reconciled by reason, through mutual respect and strict adherence to justice.

But that's of a world where humanity still survives, as the next bomb falls on Gaza, my faith that humanity does survive, diminishes.